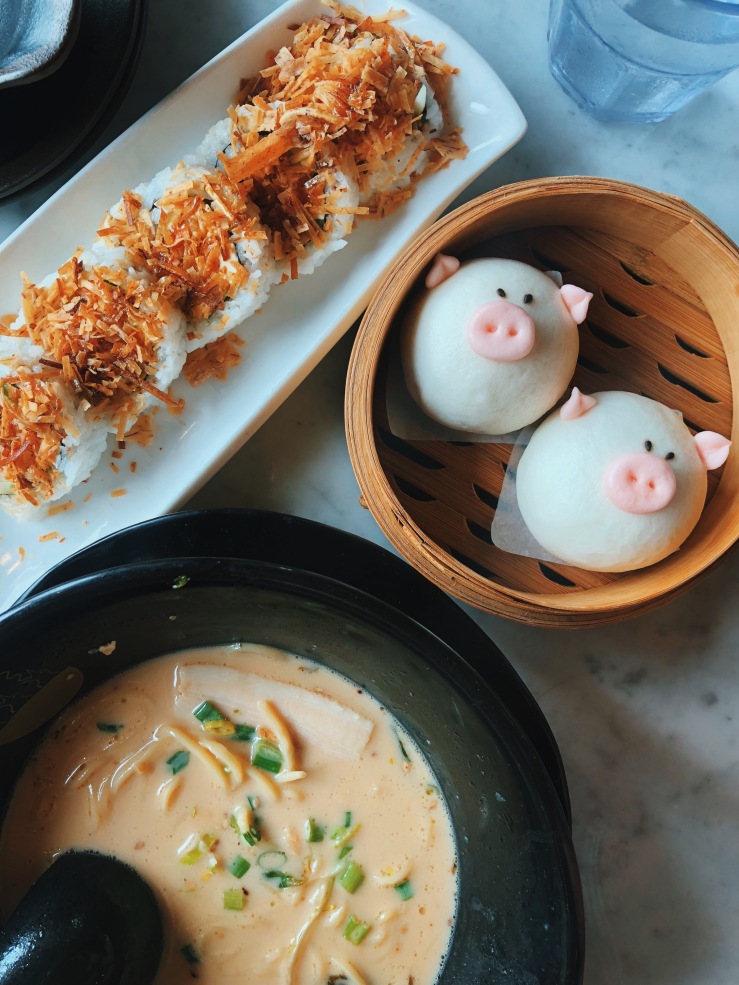 I know this post might seem like I’ve been captive in a cage for the past 14 years and have only eaten stale bread for all my meals… But I promise you, I am not over exaggerating.

Must be something in the San Diego or just sheer luck that I found the bombest places to eat. But, let.. me.. just.. tell.. you.. SIS. I came here after I went to Better Buzz, so I was already in a great mood.

Currently calling Chase Bank to let them add Harumama Noodles and Buns as an authorized user because they can literally take all of my money. Empty out my bank account please. They deserve it. If I lived in San Diego, I would either have to work here or go bankrupt from eating here so often.

Let me tell you why…

We ordered the Flying Pig ramen, Crunch Salmon sushi roll, and it of course we had to get some cute baos. Some pork filled Pig buns felt appropriate and kind of wrong?

Processed with VSCO with c9 preset 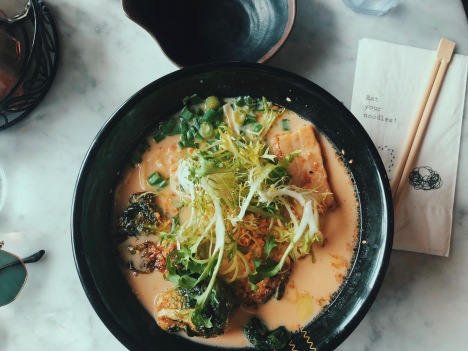 Processed with VSCO with c9 preset
The first item to come out was the Flying Pig ramen. I’m still speechless when I think about it. I don’t even know where to start. This is by far the best bowl of ramen I have ever enjoyed. Everything about it was perfect. The ratio, the chashu, the everything. I’ve never had brussels sprouts with ramen before, so this was new to me. It was packed with flavor and added texture to the dish.

Since we got two pork dishes, we decided to shake things up with some salmon. The Crunchy Salmon had tempura salmon, krab, cucumber, avocado, cream cheese and topped with crunchy taro chips and eel sauce. I know cream cheese is popular with sushi, but I never really tried it? It seemed odd to me.. Until now.  This sushi SLAPPED.I tasted the cream cheese, but it complimented the fish perfectly. The roll itself was really big. So big that I had to hold it with my hands to eat because it was too big for chopsticks. Other than that, I really don’t have complaints.

Aah the infamous buns. Fun fact on the bao, they were actually invented by a praised Chinese general, Zhuge Liang. He was leading his army across a river, when the other side told him that he needed to sacrifice 50 of his men to cross safety. Zhuge Liang wasn’t  about to play his men like that. Instead, he came up with a clever ruse of sending head sized baos down the river instead. His plan worked and allowed his troops to cross safety.
Luckily, we didn’t need to sacrifice any our soldiers. These were filled with pork, caramelized onions, and heaven. These are only cents more than regular buns. Recommend getting their cute character buns. Not going to lie, felt a little odd eating a pig shaped pork bao.
Harumama Noodles and Buns was clean, cute, and open. Although its a smaller restaurant, they were able to fit guests without squished. The decor was something out of a Pinterest board. I am a sucker for a place with tons of natural lighting. Even the servers were cute and nice. Currently counting down the days I can return back here.
11/10 recommend coming here.